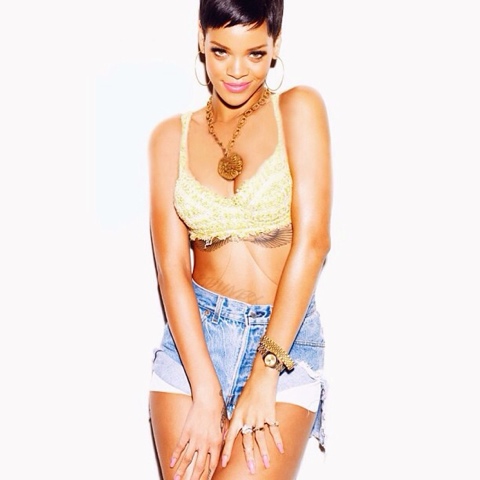 Music Of the Sun

To capture the essence of the MOTS era, which consisted of alot of bangles, cropped tops, and H&M Jeans; Mel went for a vintage look. Rihanna is wearing a Vintage S/S 1992 Chanel Bustier and denim cut-off shorts designed by Levi’s. Her look was accented by jewelry from some familiar names: Jennifer Fisher, and Jacquie Aiche. Jennifer designed her hoop earrings while Jacquie designed her gold body chain.Peruse: Jennifer Fisher’s Hoop Earrings Revealing a bit more about herself, Rihanna received her first number one track with SOS, and continued to have a snowball effect of success with her following track, Unfaithful. In this photo, Rihanna wore a crotchet ensemble designed by Palace Costume and a “Sophia” crotchet maxi skirt by designer Anna Kosturova. Purchase: Anna Kosturova Maxi During this unforgettable era, Rihanna took creative control of her fashion and her sound. She snagged her first Grammy with her genius collaboration with Hip-Hop’s finest, Jay-Z. The smash hit Umbrella was written by Terius Nash (better known as ‘The Dream’). She proved that she was a force to be reckoned with when she followed that track with a string of other hits such as Don’t Stop the Music and Take A Bow. Here Rihanna perfectly captured the essence of the Good Girl Gone Bad cover by her similar posing. Adam Selman and Mel Ottenberg teamed up again to create this unique body suit that she is wearing. Her earrings are by Alexis Bittar.
Peruse Alexis Bittar’s Site Rihanna makes a bold and fearless statement with her darkest album, Rated R. This album is probably the dearest to my heart personally, as it revealed some of Rihanna’s most intense emotions. She aptly described the album as her movie. In this photo, Rihanna wore lace-up grommeted pants from Rodarte’s Spring/Summer 2013 Collection. Her leather bustier is designed by Alexander Wang. This bustier boasts a defined bust with exposed raised seams, adjustable straps, and an exposed side zip. Although sold out in several locations, I managed to find a site that has it in stock! Be sure to purchase it while you can!
Purchase: Alexander Wang Bustier
Take a Look: Rodarte’s Spring/Summer 2013 Collection Now we have her 5th album:LOUD; which contained a plethora of successful singles. She racked up THREE more number ones with the catchy single, Only Girl (In the World), her collaboration with Drake in What’s My Name, and the racey banger, S&M. We gave you an exclusive look into the credits for this particular cover weeks ago. But to quote ourselves: Talk That Talk was another special album. This album was created specifically for us. As fans, Rihanna took to her Navy by means of social networking to get our opinions on many different developments. She released a string of missions on her Facebook, in an app called “Talk That Talk: UNLOCKED”, that engaged fans the world over and raised impetus for the album; something completely new to the social media world. She has now become the most liked artist EVER on Facebook.

Rihanna is wearing another Adam Selman look. He designed her camouflage bandana and bra. Rihanna’s earrings and suspenders are the product of vintage Chanel by Depuis 1924. Her black double-front dungaree pants are designed by Carhartt.
Purchase: Vintage Chanel Suspenders | Carhartt Work Dungarees Rihanna’s latest addition is her 7th album, Unapologetic. This album sold 238,000 it’s first week and gained her her very FIRST number one album in the United States! The lead single from her album, Diamonds earned Rihanna a 12th #1. She also amped for the album with a whirlwind tour around the world in just seven days, called the 777 Tour. In this photo, she went nude on her upper half and wore a simple black trouser by Tom Ford. Her jewelry is mostly her own with the exception of a few rings by Alice Waese.
Peruse: Alice Waese’s Site

If you missed what Rihanna wore for the rest of this amazing spread, please refer to my previous post. [Rihanna for Complex Magazine: Part I]