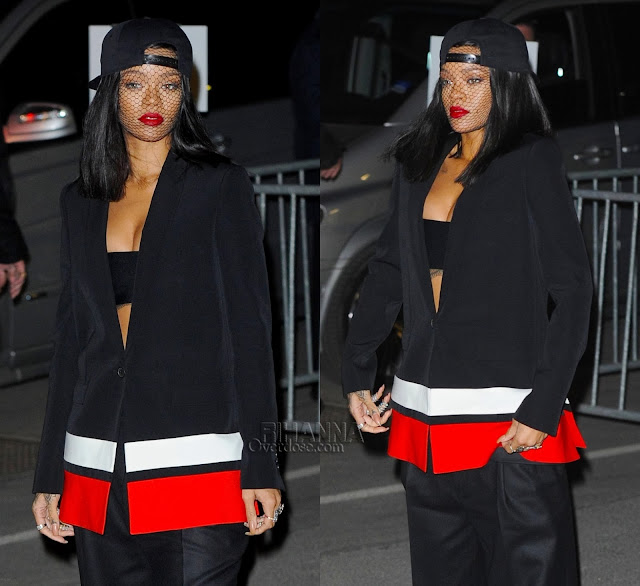 Rihanna has been unveiling one amazing outfit after another as she makes her rounds during Paris Fashion Week. Yesterday, Rihanna attended Jean-Paul Gaultier and Comme des Garçons Fall 2014 Fashion Shows. Rihanna has also been on the scene for the Christian Dior , Lanvin and Balmain Fall 2014 Runway Shows as well. Today, she attended another one of her favorite designer’s presentations — Givenchy. Rihanna has shown special interest in Creative Director, Riccardo Tisci’s designs for years. Tisci has not only made custom costume designs for Rihanna’s Diamonds World Tour, but he even used Rihanna’s face as graphic art for a custom-made shirt she wore at a Miami Heat Basketball Game in April. With her cap to the back, Rihanna sat front row at Givenchy’s Fall 2014 Show wearing a look from Riccardo’s Fall 2014 Menswear Collection. Her outfit consisted of a black blazer with white and black color block detailing along the bottom, a crop top and black loose-fitting trousers. You can peruse the rest of the collection below. The blazer she wore was also featured in his Pre-Fall 2014 Collection as well. Rihanna covered her face in a veil from Givenchy as well. This piece was featured on the Fall 2014 Menswear Runway, and it was worn by the latest face for Givenchy, singer/songwriter Erykah Badu in the label’s Spring/Summer 2014 Ad Campaign. Rihanna fittingly completed her look with a collaborative sneaker from Riccardo Tisci and Nike.
Tisci’s designs are an homage to the all-white Air Force I, and feature a multi-material “stacked” design. Premium brown leather is offered on the Swoosh, while luxe orange leather covers the sockliner. The Riccardo Tisci x Nike Air Force I shoes hit stores yesterday and retail at $225.00. Rihanna is the first person to ever wear these shoes thanks to Riccardo.