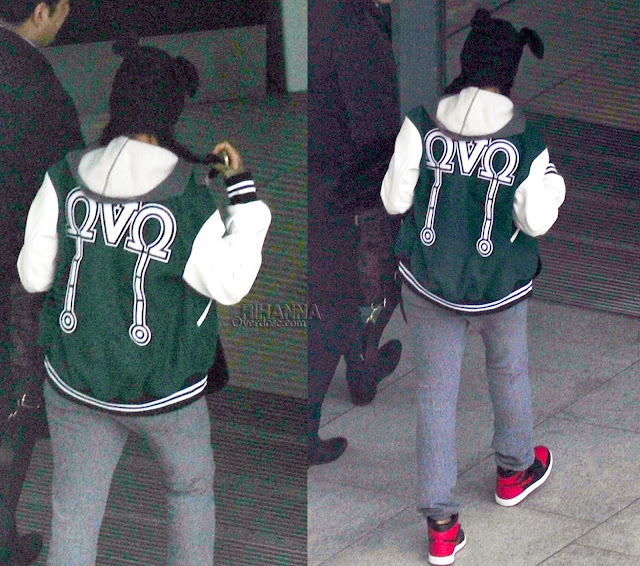 Rihanna was spotted at Heathrow Airport in London today :

Rihanna has officially ended her stay in London today. She was spotted at Heathrow Airport catching a flight to her next destination with her best friend, Melissa Forde. Let’s take a look at what she wore for the flight. Rihanna exited London in her bunny ears hat from Adam Selman’s Fall 2014 Collection. Rihanna recently wore this hat during Paris Fashion Week and has continued to wear it on a number of occasions since then. You can check out the entire collection below. Rihanna covered up today in a varsity jacket from Drake’s clothing line, October’s Very Own (OVO). These jackets were produced in conjunction with the Canadian label, Roots — a brand Rihanna has already worn before. The custom jackets were created in honor of the rapper’s latest “Would You Like a Tour?” tour. These retailed at $458.00 when they released on February 15th. and feature Letterman silhouettes, complete with leather sleeves and a plush melton body. Details on the jacket include the titles of Drake’s four albums on the right breast and an ‘O’ emblem on the left. Rihanna finished her look with sweatpants and her Nike Air Jordan I Retro High OG “Bred” Sneakers. The Bred colorway is arguably the most popular of the Air Jordan 1 model and was notorious in the 1980′s for being banned from NBA games. The Air Jordan 1 Retro High OG “Bred” made its return to retailers on December 28th of last year. This release however, was limited. Rihanna was last spotted wearing these (here) at an after party a few days ago.