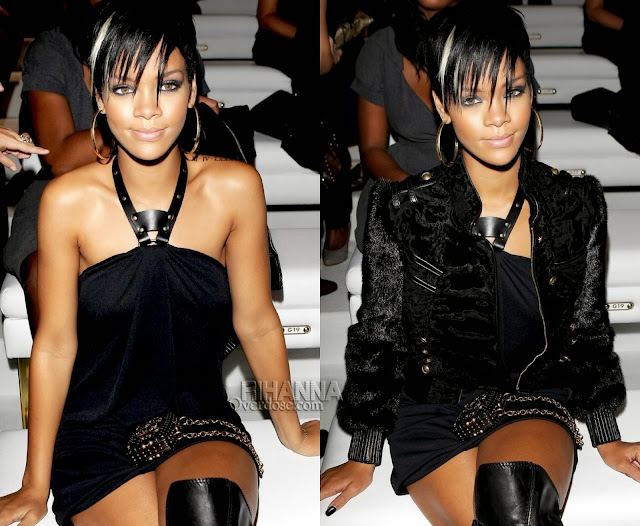 Rihanna attended some of the runway shows of her favorite designers during both Paris & Milan’s Fashion Week:

Rihanna has just ended her stay in Paris for the country’s highly anticipated Fashion Week. She wore so many fashion forward looks from the collections of the designers she loves. In light of these events, we are dedicating this week’s installment of Vintage RiRi to Rihanna’s outfits during both Paris Fashion Week and Milan Fashion Week in 2008. Let’s take a look back at what she wore during these events: Rihanna attended Chanel’s Fall 2008 Runway Show at the Grand Palais in Paris, France. She wore a patterned sweater dress from Chanel’s Pre-Fall 2008 Collection and carried a 2.55 Classic Flap Bag that was also designed by Chanel. This collection spoke to Coco Chanel’s love of of tweed, sailor stripes and cashmere knits. Rihanna then wore Christian Louboutin Catwoman T-Bar Heels. Rihanna also paid a visit to Cesare Paciotti’s store on this occasion. Much like this year, Rihanna made her rounds to more than one runway show in a day’s time. After attending the Chanel fashion show, she also sat front row at Sonia Rykiel’s Fall 2008 Presentation. For this event, Rihanna wore a purple jumpsuit that Sonia designed along with one of her handbags in a bright yellow. You can take a look at this same bag in brown, (here). On March 1st, Rihanna attended John Galliano’s Fall 2008 fashion show at the Grande Halle de la Vilette in Paris. Rihanna attended the show in a sparkling tiered dress from Galiano’s Spring 2008 Collection. Her flirty dress was but one of many in this collection which bid a strong nod to some of the womenswear in the twenties. Rihanna coupled her look with suede heels and a Chanel 2.55 Flap Bag. During this year’s Paris Fashion Week, Rihanna attended the Launch Party of Porter Magazine. In 2008, she also attended a launch party — that of the Fendi store in France! Rihanna attended the event in none other than Fendi of course. She added a pop of color to her black Fendi dress with Spring 2008 neon heels designed by Giambattista Valli. ‘The Victoria Shoe’ was named after former –Spice Girl gone style icon– Victoria Beckham, because she was the first to wear these in ELLE magazine. You can take a look at Rihanna wearing a dress Giambattista designed (here). Fast forwarding a few months to September, Rihanna also attended one of the runway shows during Milan Fashion Week. She attended Gucci’s runway show wearing the label from head to toe. The jacket she wore, was featured on Gucci’s Fall 2008 Runway Collection. Rihanna’s Devendra Mid-Heel Boots are also from this same collection. The small bag she is hold is designed by Gucci as well. If you missed any of Rihanna’s looks during Paris Fashion Week for Fall 2014 Womenswear, you can visit our posts (here) for all of the details. Rihanna was also present at several runway shows during Fashion Week in 2009 as well. You can get the details on those outfits (here).