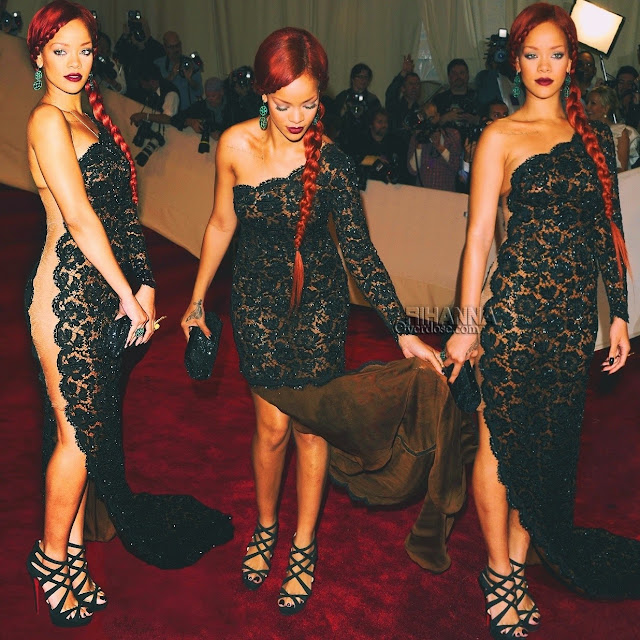 Rihanna has always been a treat to see on the red carpet of The Costume Institute Gala. The annual Met Ball or Met Gala, celebrates the yearly opening of the Metropolitan Museum’s fashion exhibit at the Costume Institute. The red carpet evening is hosted by VOGUE Magazine and it’s editor-in-chief, Anna Wintour. In this week’s installment of Vintage RiRi, we will be discussing all of her Met Gala red carpet looks! Rihanna attended her first Met Gala in May of 2007. During the event, guests celebrated the legacy of designer, Paul Poiret’s career and vision. Paul Poiret (1879-1944) was the self-titled “King of Fashion,” but he is remembered for his modern contributions to fashion, particularly for freeing women from having to wear corsets. There was also an exhibition of over 70 pieces of his work! Rihanna graced the annual gala in a white floor-length gown designed by Lebanese haute couture fashion designer, Georges Chakra. Her a-line chiffon gown was featured in his Spring 2007 Collection in yellow. You can peruse the entire collection below. Two years later, Rihanna attended the annual Met Gala in 2009. In 2009, the Costume Institute celebrated 50 years of the model and explored the relationship between models and designers. For the ceremony, Rihanna traded in her asymmetrical bob for an even edgier short cut. Rihanna wore Dolce and Gabbana’s Fall 2009 Collection puff-sleeved suit with accentuated shoulders, a white ruffled shirt and a bow tie. On her feet, she wore black Jill Sander pumps. We’ve actually discussed her look at this event in a previous Vintage RiRi post (here). By 2011, Rihanna had again transitioned into both a new hair style and hair color! She wore her red locks in a nicely styled, side-swept braid. 2011’s Met Gala event honored the late designer, Alexander McQueen and the Met exhibit featured some of his never-before seen work. Rihanna is no stranger to McQueen’s talent. She recently wore a head-to-toe look from his Spring 2014 Collection inside the pages of her editorial spread in VOGUE Magazine (here). Rihanna wore a long lace dress designed by Stella McCartney on this occasion. The dress was later put on display at The Savannah College of Art and Design Little Black Dress Exhibit. Rihanna completed her look with Christian Louboutin 150mm Balota Heels. Not to be overlooked however, are her earrings. Rihanna sported Wilfredo Rosado’s Emerald & Black Gold ‘Two-Cog’ Earrings (pictured above in diamond). You can get the diamond ones (here) online if you’d like. To match her earrings, Rihanna also wore Wilfredo Rosado’s Emerald and Black Rhodium Cog Ring. This hand-crafted Italian piece is made of 18K plated black rhodium. The “wheel” ring is encrusted with emeralds. The last time Rihanna attended the annual Met Gala event was in 2012. The 2012 gala paid tribute to the influence designer Elsa Schiaparelli had on Miuccia Prada. Interestingly, the D&G collection from which Rihanna pulled her 2009 gala outfit from, was inspired by Elsa as well. Rihanna has also really taken to Miuccia’s designs, wearing several pieces from her over the years. She recently attended the runway show of her latest collection during Paris Fashion Week (here). Rihanna chose to where a beautiful crocodile backless dress from designer, Tom Ford to the gala. Her dress was featured in his Fall 2012 Collection. Coupled with her now jet black hair, she finished the look with Christian Louboutin Pigalle Pumps. Rihanna again paired a great outfit with nothing less than great jewelry. For this event, she chose pieces from Repossi’s Berbère Collection. On her ear she wore the brand’s Black Gold with Black Diamonds Ear Cuff. This earring is well-suited for anyone who wants to add some edge to their outfit for the day, in that you do not need to have ear piercings to wear it! In addition, she sported a 7-Rows Berbère ring that features a three-row band connected by a thin box chain to a four-row band. Each band is set with two lines of white pavé diamonds.

RIHminder: To get the full recap on all of the major outfits Rihanna wore during her infamous Rated R Era, visit the Rihanna Overdose Rated R Era Fashion Recap (here). In that post you can get a detailed look at all of her photoshoots, music videos, performances and appearances!