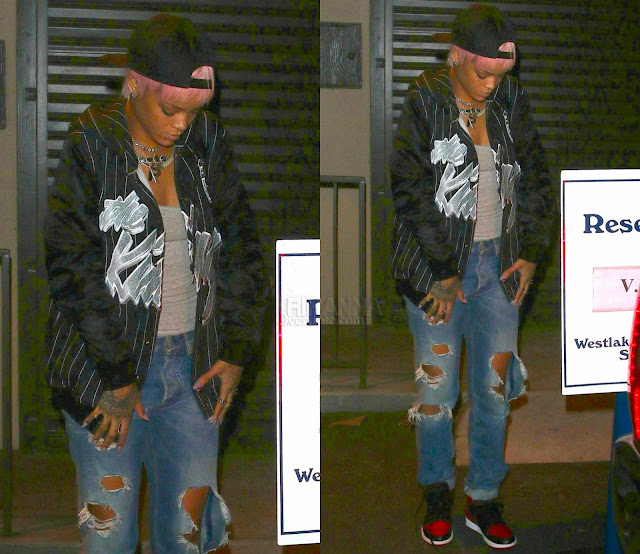 Rihanna was spotted leaving a studio in LA last night:

Rihanna has yet again been spotted leaving a studio in Los Angeles. Not long ago we saw her heading into a studio in some cool threads from designer Nasir Mazhar. She’s also been posting what many are labeling as new song lyrics on her twitter account. It’ll be super exciting to welcome in a new era of long-awaiting music from Rihanna! It hasn’t been all work and no play from her however, she participated in her cousin’s baby shower (here) in Malibu. At any rate, let’s check out what she wore to the studio. Rihanna stepped out of the studio last night with her cap to the back wearing a JoyRich The King Rich Hoodie. This baseball inspired piece is striped with contrasting black sleeves and features the words, “The King” with the brand’s signature JoyRich bear patch on the chest. Her jacket also offers a gold snap button front and welt pockets. You can get her jacket below or in white (here). You can also purchase her jacket in t-shirt form (here). [image via: incognitomp.com] Rihanna then wore her favorite Acne Generic Girl Jeans. These have been a go-to for Rihanna for years now. These ‘Generic Girl’ mid-wash blue denim boyfriend jeans feature ripped detailing at the front and five pockets. Of course, the original jeans are not as distressed as Rihanna’s. Rihanna finished her look with her Nike Air Jordan I Retro High OG “Bred” Sneakers. The Bred colorway is arguably the most popular of the Air Jordan 1 model and was notorious in the 1980′s for being banned from NBA games. The Air Jordan 1 Retro High OG “Bred” made its return to retailers on December 28th of last year. This release however, was was limited. Rihanna was spotted wearing these (here) when she initially touched down in Los Angeles, on the 28th of March.