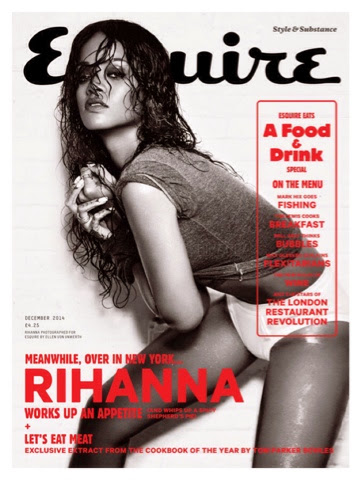 As you may have picked up on, in several of our posts we’ve been hinting around at the photoshoot Rihanna starred in for Esquire UK’s December 2014 Issue. The food and drink issue is a speciaI one indeed. This particular issue is a part of the Style & Substance series and it is definitely a treat for Rihanna’s fans! The reason is because — besides the sexy shoot that we will get to in just a moment — Rihanna shared some of her favorite recipes with the magazine! How many of you have ever wondered, ‘just what does Rihanna like to whip up in the kitchen?’ Well, that question and many more have been answered in this issue! We’ve got all the recipes for you here on Rihanna Overdose. Head over to our post linked in below to get the details. Your next option would be to stay here with us as we take you inside the shoot! Now, before we even get started, Esquire is a mens magazine. With that being said, it comes as no surprise that there isn’t much clothing to cover here! The risqué shots we’re taken by master photographer, Ellen Von Unwerth. She has been the genius behind some of my favorite shoots during the Rated Era. We’ve covered every photoshoot from that time period. If you’re like us and simply cannot get over that time period in Rihanna’s career, you can review all of her shoots, appearances and MORE from our extensive Rated at Era Fashion Recap. The photos for this shoot however, capture Rihanna working up a sweat and playfully cooling down. In this photo, which is the same look for the cover of the magazine, Rihanna is wearing an American Apparel t-shirt and white briefs from Calvin Klein. Both her rings and Necklace are from Chrome Hearts. Here in another photo that allows us to see Rihanna from head to toe, she’s wearing the previously listed pieces with her favorite Manolo Blahnik Chaos Cuff Sandals. This picture is probably everyone’s favorite — including ours! Rihanna confidently strips down here to nothing more than a pair of Levi’s jeans! Sexy! Although this photo was not included in the editorial, we loved the outtake so much we just had to fill you in on the fashion details anyway! Here, Rihanna cools off with a fan wearing a pair of Stretch Mesh Briefs from Versace’s Spring 2015 Menswear Collection.

Now that we’ve come to the end of our recap, here’s a few more things you can do »