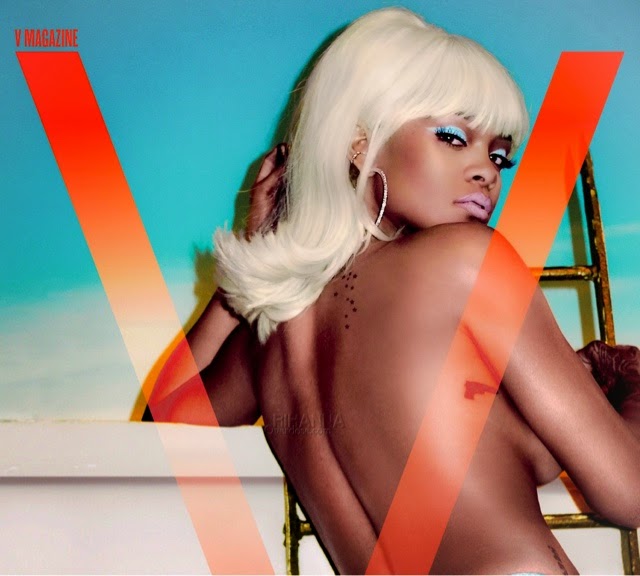 Rihanna is always surprising us with her photo spreads for the world’s most prestigious magazines. This time around, Rihanna is the star of V Magazine with a brand new cover and editorial spread for their V95 Summer Deluxe Editon. The photos were taken by Steven Klein and the looks within the spread were styled by Carlyne Cerf de Dudzeele. In the magazine she dished about privacy and what you’ve all been dying to know about — her new music. Let’s take a look at what she wore for the shoot:

The cover itself is very eye-catching as Rihanna is sporting nothing more than a platinum blonde wig and blue Versace underwear. The low cut panties matched the blue eye shadow she wore for the shot as well. Rihanna is no stranger to the label’s undergarments. In her photoshoot last year for Esquire’s Special Food and Drink Issue, she wore men’s briefs.

Dude, I’m in love with my interludes. This one called ‘James Joint’ is on constant repeat. [The album is] soulful and aggressive, whether it’s lyrically, musically, or just the tone of my voice. It’ll feature a few songs that have already come out including, “Bitch Better Have My Money,” “American Oxygen” and “FourFiveSeconds –Rihanna

In this next shot, she covered herself in a Spring 2014 yellow fur courtesy of couture designer, Alexandre Vauthier. Vauthier became one of Rihanna’s go to designers during the Rated R Era. His bold high shouldered frocks were the center piece of several of Rih’s performance and appearance looks. Luckily, you don’t have to scramble to find out what looks we are referring to because we’ve covered every outfit from the Rated Era from her performances, her appearances and even her photoshoots in our extensive Rated R Era Fashion Recap. Underneath the coat Rihanna donned Ralph Lauren’s $146.00 Tropical Pink Martinique Swimsuit.

Here, she pulled another fur from Alexandre Vauthier’s designs. She paired the fur stole with Versace swimwear. On her feet she wore a pair of translucent Manolo Blahnik Pacha Cap-Toe Pumps.

For this next look, Rihanna gave the shoot some 90’s retro appeal by wearing a pink Juicy Couture Velour Tracksuit. She accessorized in this photo with Kenneth Jay Lane rings.

The thing that made me fall in love with [‘FourFiveSeconds’] is the juxtaposition of the music and the lyrics. When you read the lyrics it’s a completely different song than what you are hearing. The music is easygoing, but the lyrical content is very loud and in your face. In performing this, the key was to make sure the aggression wasn’t lost –Rihanna

For this close-up Rihanna wore the same Kenneth Jay Lane Rings with an American Apparel Romper and a hat from Carlyne Cerf de Dudzeele’s collection.

In this sexy shot from within the editorial, Rihanna wore white shorts from Carlyne Cerf de Dudzeele’s collection with a Billionaire Boys Club IC Cones and Bones Tee that was altered into a revealing crop top.