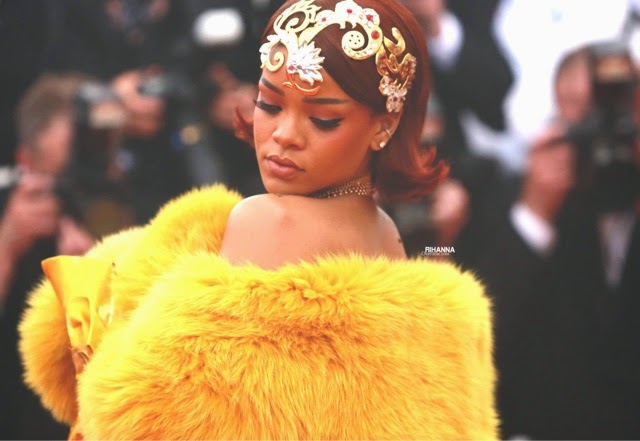 Rihanna attends the 2015 Met Gala at the Metropolitan Museum of Art in New York :

The annual Met Gala that is held on Fifth Avenue at the Metropolitan Museum of Art, is definitely the one of the biggest parties of the year in New York. The event is usually attended by A-List Actresses, Actors, Fashion Designers, Singers and host of other elite talents in the industry. Why, just last year the event generated almost $12 MILLION dollars! For years now, Rihanna has been one to watch at the Gala and we’ve covered every single look she’s worn the five times she’s attended during her career. You can head over to our special ‘Met Gala’ section, for the details on all five looks.

This year, the event’s theme is centered around Chinese fashion and the exhibit is called, China: Through the Looking Glass”. The exhibit showcases Chinese art, artifacts and a number of dresses that interpret Chinese design from the likes of fashion heavyweights, Tom Ford, Alexandaer McQueen, John Galliano and Jean Paul Gaultier. In her time in the industry, Rihanna has worn a host of looks from each of these designers. With that being said, the question you all are no doubt here to find the answer to is, WHAT DID SHE WEAR TO THE GALA TONIGHT? Let’s discuss!

Rihanna looked absolutely stunning in a full look from Guo Pei’s Fall 2010-2011 Collection that also included an intricate headband! Yes it’s a vintage look and we are in love with it! Guo Pei is the biggest and most renowned name in China’s fashion scene. According to Fidè, she has been designing Couture in Beijing through her Atelier “Mei Gui Fang” for many years. Her creations reflect a strong Oriental culture, with a striking mix of classic fantasy and modern avant-garde. The train on this ensemble Rihanna is extremely long and it took the helping hands of her stylist, Mel Ottenberg to carry it along the red carpet. You can check out the full collection below.

Rihanna completed her look with Cartier jewelry, which included this beautiful necklace from the label’s latest Paris Nouvelle Vague Collection. She then wore a custom-made Agent Provocateur Bustier and Christian Louboutin Heels. Her heels of choice from Christian were these Muse Lamé Triple Strap Pumps that retail at $995.00.

Not only was her outfit eye catching — but so were her nails! Rihanna’s nails were done by her longtime manicurist, Kimmie Kyees using products from Red Carpet Manicure. She used their $10.00 Your Favorite Designer LED Gel Polish and finished it off with gold glitter from Red Carpet Manicure’s $19.99 Glitz and Glam Kit. You can purchase both below.

Once inside the event, Rihanna took the stage in front of her friends and peers performing a couple of her hits, including Bitch Better Have My Money. She performed wearing an antique Chinese headdress and custom Maison Margiela Bustiers and Trousers. Her accessories consisted of Cartier Jewelry (which included a beautiful Panthére Bracelet) and red Cornelia James Gloves.

After the event, there was an after party that Rihanna attended. She continued to dazzle even after changing ensembles. For the party she wore pieces from Margiela’s Fall 2015 Collection. From the runway show, she rocked Look 22 and Look 30.

The look consisted of a sheer top with fur detail around the hem and the sleeves along with silk trousers.