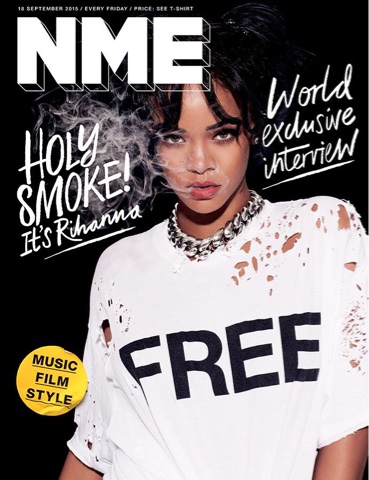 Rihanna’s landed another magazine cover guys! This time around, it’s for the British music journalism magazine, NME. Our fashion icon is the first to cover the magazine’s latest weekly FREE issue. Every Friday copies will be handed out at 26 rail stations, 64 tube stations and 49 universities. Readers will also be able to pick up issues from 140 Topman stores, 121 HMV stores, 13 Academy Music Group live venues and 75 independent record stores. We know you all are eager to nab this free issue, and so are we!

Inside the issue, Rihanna spoke about her upcoming eighth studio album, as well as her thoughts on Taylor Swift, life in the public eye, working with Kanye West, feminism and the fallout from her ‘Bitch Better Have My Money’ music video. The new, free NME magazine launches on Friday September 18 and will be distributed across the UK in more than 500 locations. Now let’s get into what you guys came here for — the FASHION. The shoot was styled by designer, Matthew Adams Dolan. You’ve heard his name several times here on Rihanna Overdose because Rihanna’s worn his pieces so many times! For this shoot, Matthew incorporated several of his pieces into the shoot. Starting with her denim work throughout the shoot. On the cover as well as a few of the accompanying images, Rihanna sported a custom “FREE” t-shirt with rips and tears that was made especially for this shoot along with a denim jacket and jeans from Matthew’s Spring 2015 Collection. She wore this same look in the above image. Rihanna paired her denim jacket and jeans with fringes with a Versace Top and PUMA Slides.