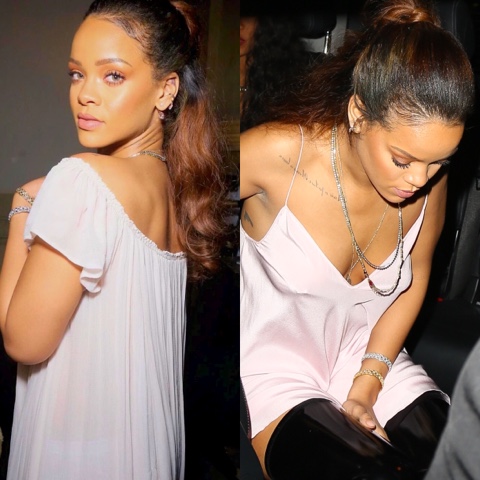 Rihanna has been in Paris for a few days now partaking in some of the fashionable events surrounding Dior and Paris fashion Week. Just earlier, she was spotted at a restaurant in Paris. Did you see what she wore? If not, you can take a look at our previous post to find out! Rihanna attended a VOGUE party today as well! Let’s review her look!

Rihanna attended the VOGUE party in Paris wearing an outfit from Christian Dior’s Fall 2015 Couture Collection. If this collection looks familiar to you it is because Rihanna literally just wore from it the other day at the Spring 2016 Dior Runway Show. If you missed her look at the fashion show, take a gander at our post for all of the details. This time around, Rihanna opted for a sheer number from off the runway with an elongated silhouette.

Rihanna is actually wearing the garment under the model’s cloak that she sported just the other day. But to give you a look at it, here’s a photo of a model wearing the similar look with long sleeves.You can review the runway collection below. She also carried a really pretty Lady Dior handbag.

Rihanna’s shoes were also from the same collection. Take a look at the photo above to see what her platform sandals look like up close!

Later that evening Rihanna partied at De Arc in Paris wearing a pale pink Christian Dior Slip Dress with Fall 2015 Boots. She also wore lots of My Dior Dior jewelry. She wore two Cannage Bangles on one of her arms (one in 18K Yellow Gold and one in 18K White Gold) — both of which retail at upwards of 11,097.00+. She also wore two My Dior Cannage Rings in 18K Gold (she wore one with diamonds and the other without). The rings retail at upwards of $6065.00+. On her other arm she wore a My Dior Cannage Bracelet Cuff. This Cuff retails at upwards of a staggering $134,520.00+!!