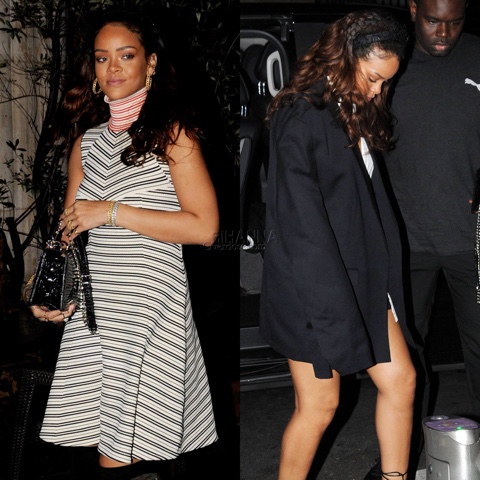 Rihanna has been enjoying her time in Paris thus far and for us as fans, we’ve seen her flaunt one amazing look after another! She was last spotted taking in the sights and sounds of Paris with her family at the Eiffel Tower. If you didn’t catch what she wore, you can head over to our previous post to find out. Last night, Rihanna was spotted at a restaurant in Paris and then later on she enjoyed the rest of her evening at a nightclub in the areas. Let’s take a look at what she wore. Being that Rihanna has been wearing head to toe Dior everyday in Paris for the duration of her trip, it comes as no surprise that she’s sported more from the label for dinner. She hit the eatery in Paris wearing a turtleneck dress from Christian Dior’s ‘Esprit Dior’, Pre-Fall 2015 Collection. The show took place at Ryogoku Kokugikan on December 11, 2014 in Tokyo, Japan. Rihanna has worn several looks from this collection that were showcased in her Dior ad. Take a look at all of the ones she wore here. The striped ensemble Rihanna wore was actually modeled by Julia Hafstrom underneath her top garment. From what we can see so far, Rihanna wore a black blazer to the nightclub. She paired the blazer with a pair of Tom Ford Chalk/Black Patchwork Sandals. The shoes retail at $1,590.00.