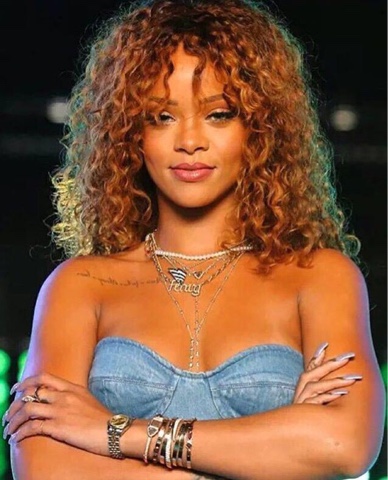 Rihanna acts as key advisor on an upcoming episode of The Voice:

Rihanna’s been keeping an extremely low profile since the release of her upcoming album cover! However, we’ve got some quick news to run by you today. Rihanna will be guest staring in NBC’s The Voice. Her episode will air on October 26th. It was announced back in August that the songstress would be a key advisor so we are excited to see it finally come to life.

A clip from the episode released yesterday and we just want to give you the rundown on some of the fabulous jewelry she is wearing in addition to her outfit. First up we have her custom “FENTY” White Diamond Gothic Font Necklace. She layered the piece with some Jacquie Aiche jewels. Jacquie revealed to me that her pieces included two Diamond Body Chains, a Necklace along with her watch and gemstone/gold bangles! She then wore Inez Vinoodh’s Oxidized Pearl Necklace. Lastly we have a really special necklace! As part of Roc Nation, Rihanna is rocking a beautiful Diamond Encrusted Roc Nation Airplane Logo Necklace designed by Gabriel Jacobs, of Rafaello & Co.

She opted for an all denim ensemble from designer duo Marques’ Almeida. She wore a corset from their Fall 2015 Collection which retails at $435.00 at Opening Ceremony. She then wore a pair of denim trousers from their Resort 2016 Collection. The look was completed with $725.00 Manolo Blahnik Black Chaos Cuff Sandals.

Watch the clip below: