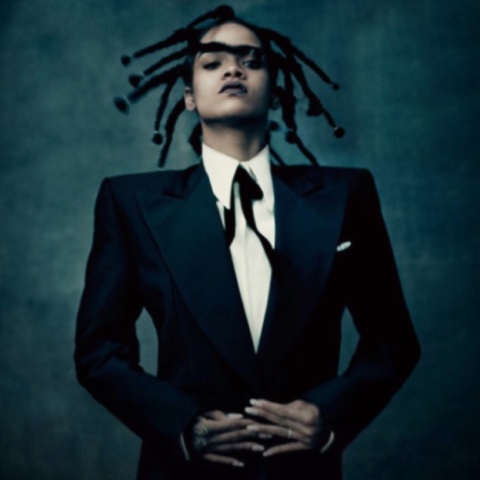 Rihanna reveals some of the album art for her upcoming album:

Rihanna has been dropping teasers for her highly anticipated album that has taken on the name, ‘R8’ which basically means, (Rihanna’s 8th album). As of January 28th, that unknown album saw its release as ANTI. The tour that spawned from the album is called, The ANTI World Tour. For months, we all wondered just what the teaser photos Rihanna had been releasing were for. At the tour’s kickoff show in Jacksonville we got our answer! All of the photos and several more were featured in the ANTI Tour Book in addition to some that were to be used for her single covers. Let’s take a look at what she’s wearing in those photos. On her birthday (February 20th), Rihanna released this photo onto her Instagram. She has really taken a liking to this coat from up and coming designer, Jessica Walsh. Jessica Walsh graduated with her BA from the University of Westminster before progressing to the MFA program at Parsons. The oversized padded jacket she designed that Rihanna is wearing, plays with the masculine form through its oversized silhouette. She’s worn it a number of times already. We’ve covered them all! Check it out! In this particular photo, which doubles as the single artwork for Rihanna’s latest single, Bitch Better Have My Money, she wears a cool leather jacket from the Japanese label, Undercover. The Undercover Spring 2015 Collection Runway Show featured the leather jacket Rihanna wore. This biker-style jacket feature several silver zip closures with dangling silver details on each zipper! You can check out the full collection below. Rihanna accessorized in this set of photos with a pair of Dannijo $328.00 Gale Earrings. The oxidized silver plated earrings are made with Swarovski Crystals. It’s been months since we’ve had an update for this post and by now you guys know this album now has a name and will release SUPER SOON… ANTI. In this latest image for the single, Work released by Rihanna for her latest slew of musical projects, we find more fashionable pieces. Here, Rihanna is wearing Jennifer Fisher’s $1,115.00 Gold-Plated Sleeve Cuff. The cuff resembles a double-button barrel shirt cuff. In this photo that actually released during the announcing of Rihanna’s upcoming ANTI World Tour we see her sporting a bold suit. Here Rihanna is wearing a suit from Schiaparelli’s Fall 2014 Couture Collection. In this shot from within the book, you cannot see her shirt in full, but partially. The tee is actually a vintage Dr. Dre hip-hop top from the 90’s and says In Bud We Trust. Check out a few images of the piece above! This photo is probably the most controversial of the bunch from the booklet. The snap was also featured on a black and a white tee within the merchandise from the tour with the word “Rolemodel” on the front. Rihanna bared it all from wearing nothing more than these cool Thigh-High Boots from within Vetements P/E 2015 Collection. This look from the book actually doubles as the single cover for, Needed Me. This look is rather interesting as it resembles an oversized pair of jeans! This daunting look is a product from the brand, Ashish. Rihanna’s Blue Cotton Denim Jumpsuit With Shoulder Embroidery retails at $1,322.00.

In promotion of her new album, Rihanna started up the AntidiaRy in collaboration with Samsung to get her fans excited! To get the rundown on everything she wore in those videos, visit our AntidiaRy Fashion Recap