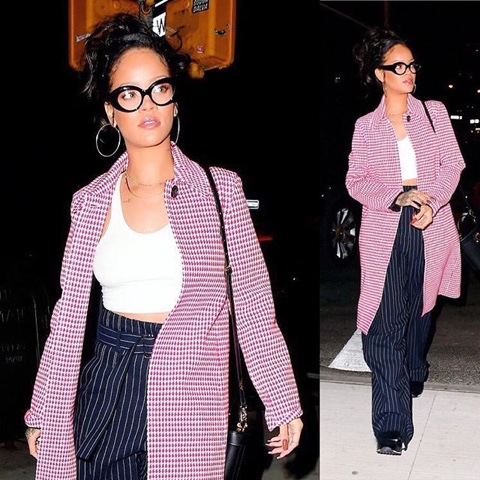 Rihanna is sure to take fashion to even greater heights in the year 2016. On New Year’s Eve she set the precedent by stepping out in a stunning look from Fendi. Did you miss the details? Not to worry! You can visit our previous post for all of the info you seek. Last night, Rihanna was spotted at Nobu Restaurant in New York. Let’s take a look at what she wore. Rihanna grabbed dinner last night wearing a look from the Resort 2016 Collection of Céline. She began things with a long Red Houndstooth Coat from the showroom floor. An interesting fact about this jacket in particular is that while it was not featured on the runway, the designer behind the label, Phoebe Philo herself wore it to the LVMH awards in Paris last year. Doesn’t Phoebe look adorable in the image above? Chic! Rihanna then wore pinstripe trousers that were also designed by Céline! Yep, looks like Rihanna went for a matching set last night as these wide-leg trousers are also from the Resort 2016 Collection. Once again, her trousers weren’t featured on the runway, but! The similar design and matching belt was featured on three different looks within the show. Pictured above is a look at one of them. Take a look at the entire collection below. Another accessory Rihanna sported for night was a $2,601.00 Mark Cross Benchley Saffiano Calfskin Binocular Bag. You can get it in the color, Honey for a bit cheaper ($2,495) here as well as the color Flame here. The color Rihanna chose (black) is no longer available online.

Rihanna’s look took a sophisticated turn with her choice of eyewear for the night. It took me a while to find these… Actually it took me years to find these. Not sure if you guys remember or not, but this isn’t the first time she’s worn these glasses. Back in April of 2013 she wore them with a piece from her collection with River Island. Back then the glasses were never found. But as of THREE years later, I have finally got the answer you’ve been waiting on. Rihanna went to Nobu Restaurant wearing a pair of vintage eyeglasses from Cutler and Gross. The pair she wore is pictured above in its original form as sunglasses. While I’m still awaiting confirmation as to whether her optical lenses are custom or not, it’s clear that Rihanna’s been sporting an optical version of the brand’s signature 0317 model. The sunglasses retail at $500.00 and feature a sweeping brow line and wide temples. It is handmade in Italian acetate; hand-polished and fitted with UV absorbing lenses. In finally unearthing the designer behind her glasses after three years, I’ve also found another pair she wore with a look we haven’t discussed here on Rihanna Overdose. Do you guys remember this look? Super cute right?! Back in October of 2012, Rihanna hit the studio wearing a $2,350.00 Nina Ricci Hot Pink Zip Front Coat, which she paired with a Spring 2013 Hood by Air Pink Poodle Long Sleeve Top and $130.00 Nike Air Force 180 “Volt” Sneakers. The kicker here is that she wore a pair of glasses that once again seemed to have stumped the entire world. Four years later, you heard the answer here FIRST! Rihanna wore yet another optical take on a vintage model from Cutler and Gross. On this occasion, she wore the brand’s 0383 Model with optical lenses. This $495.00 pair is one of their first models to be inspired by Audrey Hepburn’s style. It is also handmade in Italian acetate. Rihanna also wore these glasses again in June of 2013 while in Germany.