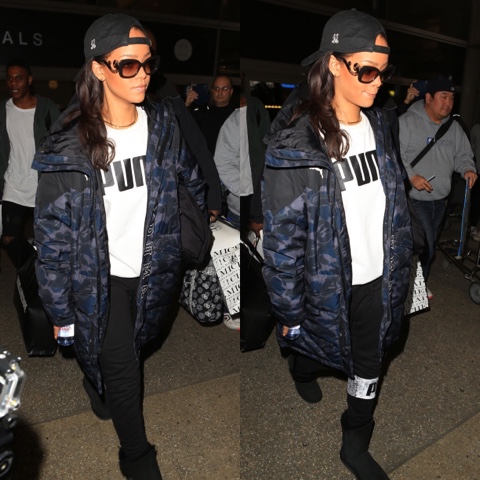 Rihanna wears BAPE x PUMA and 40oz Van on her flight from Paris to LA:

Rihanna is finally making her way back across the pond after being stationed in Paris. She spent time there filming for the movie, Valerian and the City of A Thousand Planets. While she was there her stunning commercial ad for the upcoming Super Bowl/Grammys released as well. She’s now headed back to Los Angeles. Let’s take a look at what she wore for her flight. Rihanna left Paris wearing one of her favorite 40oz Van “Studios” Caps. She then covered up in a BAPE x PUMA Long Coat in Black. She was last spotted wearing it back in December of last year. If you want a coat like hers, you’ll have to shop for it on eBay! There are a few offers ranging from $535-650 you may want to check out below. It’s also available in limited quantities here for roughly $519.00.

Rihanna also wore a pair of £34.99 PUMA Icon Sweatpants. She’s worn these before in September of last year. They are currently 20% off on sale for £27.99 at Surfdome Shop. Grab a pair while you can below!

Upon arriving at LAX, Rihanna was again photographed by the paparazzi. In these shots, we were able to get a few more outfit details! She donned a $300 pair of Prada Square Baroque Sunglasses in Brown/White. They feature gradient square lenses and swirled arms with logo detail. We mentioned previously that she wore a PUMA Sweatshirt under her coat. Well, we can now ID the piece as PUMA’s $55.00 Crew Neck Sweatshirt with Taping. You can purchase it below. She completed her look with UGG $129.95 Bailey Button Boots.

We also spotted Rihanna wearing a Vintage Gold Cameo Ring. This type of ring can vary in price, from a couple hundred to over a thousands dollars. Pictured above you can take a look at a vintage model like Rihanna’s.