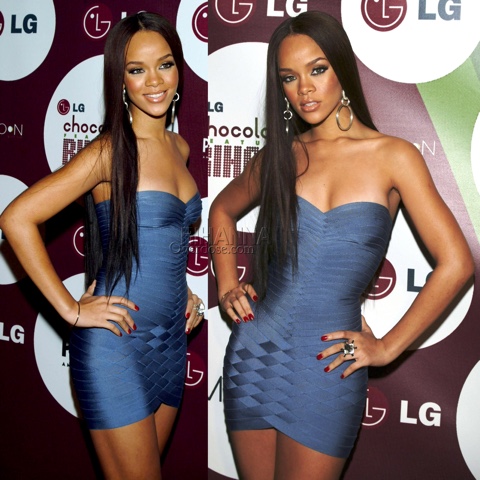 Rihanna has an ever-growing catalog of designers she’s worn throughout her career. However, as you may have noticed, she definitely has her favorites! One of such brands she latched on to over the years, is Hervé Léger. In the earlier stages of her career throughout some of the more current periods, she’s loved his dresses! In this week’s installment of Vintage RiRi we’ll be taking a look back at all of her outfits featuring his designs. HERVÈ LÈGER is a French fashion house founded by the designer Hervé Peugnet, currently known as Hervé L. Leroux. Hervé has contributed to the designs of Chanel, Lanvin, Fendi, Diane von Furstenburg, Chloe and Swarovski. Four years after beginning to work on his own, he created his signature bandage dresses that were inspired by his experience in designing bathing suits and some throwaway seam bindings. Rihanna attended the MTV Movie Awards in June of 2006 wearing a black and white vintage Hervé Léger dress! In my research of Hervé’s designs, I found this little number within his Spring 1996 Collection. The details here perfectly match Rihanna’s dress with the exception that hers has a crisscross halter and a shorter length. This was her first public sighting in his designs. Rihanna found herself in London on September 20th 2006 for the annual MOBO Awards. While there, she took home the award for “Best R&B Act” and performed her hit, Unfaithful. She wore a Black Sequined Cocktail Dress from Hervé Léger. On December 4th 2006, Rihanna attended the LG Chocolate Party. At the event she sported a vintage Hervé Léger Bandage Dress. This piece was featured in his Spring 1998 Collection. In February of 2007 it was Grammy season in the entertainment world! Rihanna geared up for the event by attending Clive Davis’ Pre-Grammy Party on the 9th. She attended the party wearing a $1,150.00 Hervé Léger Alexis Zipper Front Bandage Dress. This pink stretch bandage dress features a zipper through the front and cap sleeves. You can take a look at all of her Grammy and Pre-Grammy outfits from our extensive coverage of the events throughout her career here. Rihanna posed for US Weekly in 2007 wearing an orange Hervé Léger Dress. Pictures her is Victoria Beckham, who also wore the dress that same year. Rihanna was chosen to have “celebrity legs of a goddess” on June 8th 2007 at Venus Breeze’s Celebrity Legs of a Goddess Presentation. At this event she wore a $598.00 Hervé Léger Charlotte Skirt. The electric blue body-hugging skirt complimented her toned silhouette. She finished the look with $785.00 Christian Louboutin Blue Leopard Patent Leather Pigalle Pumps. On June 26th Rihanna attended the 2007 BET Awards! For this event, she pulled another look from the archives of Hervé Léger’s Spring 1996 Collection! Her form-fitting dress with a lovely sweetheart neckline and ruffled hem definitely stole the show! She also donned $675.00 Silver Glitter Christian Louboutin Pigalle Pumps. The fashion didn’t stop at the awards show folks! Rihanna stunned yet again at the House of Courvoisier BET After Party in another Hervé Léger Dress! She added a touch of color to her look with $675.00 Christian Louboutin Yellow Graffiti Pigalle Pumps. On September 18th 2010, Rihanna joined gal pal, Katy Perry in Las Vegas for the KÀ by Cirque du Soleil Show. She look lovely with her vibrant red locks and a figure-hugging dress from Hervé Léger’s Fall 2010 Collection. Of course, no look was complete without her Nude Christian Louboutin Pigalle Pumps — a fact Rihanna revealed to me over five years ago during this time. The last look we will be reviewing is from Rihanna’s 2011 retreat to St. Tropez. She was spotted enjoying herself wearing a Hervé Léger by Max Azria $1,950.00 Geometric Jacquard Dress. Her dress features patchwork geometric-patterned panels, a sweetheart neckline and a hidden back zipper. Rihanna was photographed for Seventeen Magazine’s August 2010 Issue (which she also wore in Barbados in 2009), celebrated her 22nd birthday on February 20th 2010 and posed for the April 2011 Issue of VOGUE Magazine — each look featuring Hervé Léger designs. Click each link to get a detailed look at each outfit as well as the accompanying editorial spreads and her previous birthday ensembles.