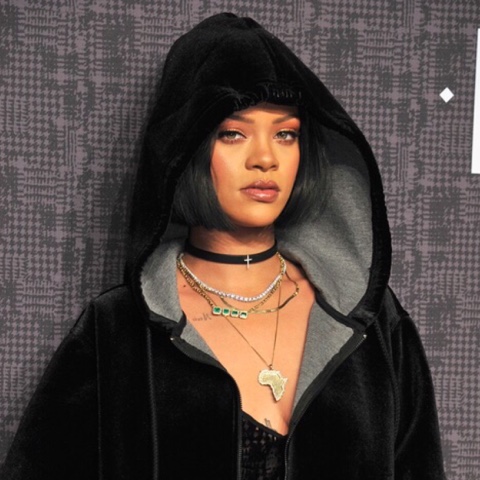 Tonight is another huge one for Rihanna! She’s attended many runway shows over the years but this is her first presentation during New York Fashion Week where she will unveil her collaboration with PUMA. Here’s what she wore on the way to her show:

Rihanna was filmed by Melissa on the way to her event wearing none other than Vetements. She’s been wearing almost every look from the SS16 collection! Just last night she wore another ensemble from the runway out to dinner at Da Silvano. Today’s look is a $1,565.00 Black Twill Double Shirt. Splurge on this piece below. Rihanna presented her collection wearing none other than HER COLLECTION. She wore an oversized hoodie that featured exaggerated sleeves along with a long length slip dress embroidered with the words, PUMA in Gothic font. Here’s a look at a similar design from the presentation that features the same aesthetic as the slip dress we just mentioned. In this photo from the show, we can see the exact shoes she wore which feature a leather build and the signature platform that Rihanna has come to love. She took her final bow wearing another look she designed which featured a multi-color oversized jacket and the footwear featured in this photo from the runway. There was of course no shortage of jewelry during the presentation on both Rihanna and the models walking the runway. Rihanna layered a Jacquie Aiche 14K Gold Emerald Bar Necklace (pricing available upon request) with her favorite Diamond Estate Kentshire Necklace. Her Jacquie Aiche piece was custom made in Los Angeles. The image above is an exclusive look at a similar model courtesy of Jacquie’s team. Over the past few days you may have also noticed the Africa continent pendant necklace Rihanna has been wearing. Rihanna’s stylist revealed to me that this piece is custom-made by a jeweler making it one of a kind! Lastly, she rocked a Lynn Ban Leather Choker with a Pavè Diamond Cross. Thank you to Jahleel, Jacquie Aiche and Lynn Ban for this exclusive info and photos! Rihanna also wore a number of diamond rings on her right hand! These rings are all from Lynn Ban! Above is another exclusive look at her Silver & Diamond and Black Rhodium Silver & Black Diamond Band Rings that you’ll only find here on Rihanna Overdose! As we mentioned, the models too were clad in Lynn Ban’s jewels to take the ghetto goth motif that Rihanna is quite fond of to new heights. Up first we have a photo of well-known model, Dudley O’Shaughnessy wearing Lynn Ban’s Napa Leather Choker & Cross Bib that is made of Black Rhodium Silver and Black Diamonds. One of the most familiar names on the list of models for the show was Gigi Hadid, who wore Lynn Ban’s Rosary Body Chains that are made of Black Rhodium Silver and Black Diamonds along with a Silver & Diamond Baguette Choker, and Leather Choker with a Silver Cross. Let’s take an even CLOSER look at the model’s jewelry from Lynn Ban. Here’s a few exclusive unreleased photos from backstage at the event. In this close-up, the model has a full on goth-PUMA manicure with Lynn’s Black Rhodium Silver & Black Diamond Circuit Rings. In this next exclusive behind-the-scenes close-up, Rihanna’s model sports Lynn Ban’s cleverly named Matte Black & Black Diamond Desperado ring. As you all know that is the title of the fifth track on Rihanna’s new album, ANTI.