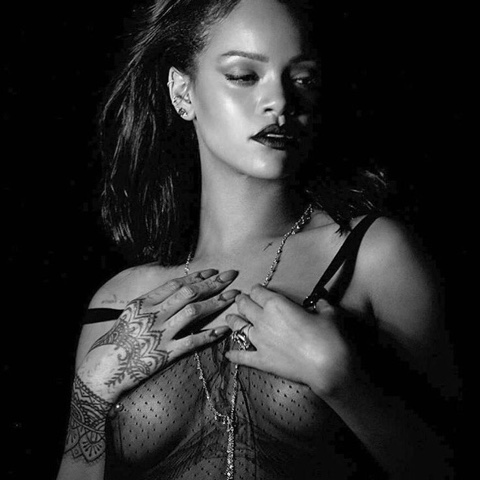 Here’s everything Rihanna wore in the “Kiss It Better” Music Video:

I don’t know about you guys but I am super excited for the release of this video! Kiss It Better is my personal favorite on Rihanna’s ANTI album so I was elated to find out that it was one of the slated singles. In this post we will be giving you the rundown on all of the pieces she’s wearing throughout the video. The stunning visuals for the video were brought about under the direction of Craig McDean. Craig is a phenomenal photographer who’s been the figure behind some of Rihanna’s best shoots to date such as her editorials for W Magazine in 2009, TIME Magazine in 2015 and most recently her shoot for British VOGUE. Let’s get into the fashion credits for Kiss It-Kiss It-Better baby! In this image from the shoot from the
Video, Rihanna is wearing a Pinstripe Vintage Issey Miyake Jacket from What Goes Around Comes Around. She’s worn this brand before during her interview with Ellen. She then wore a slip from Hanky Panky. She then wore Vintage Tap Shorts. Her jewelry for this look is from Jacquie Aiche which include her halter bra, anklets and body chains. Rihanna’s shoes are from none other than Manolo Blahnik. She donned Manolo’s $432.00 Pitina Watersnake Sandals. These sandals have a 4.3″ heel. In this sensual capture, Rihanna is wearing a beautiful vintage romper from Ilissa Lingerie. She again wore the Jacquie Aiche jewelry mentioned previously.
She paired it with Neil Lane Rings and ear cuffs from Seul and Eva Fehren. This picture shows off the risqué Yohji Yamamoto Suspender Pants from Resurrection Vintage. Her necklace is from Jacquie Aiche. We mentioned Jacquie Aiche’s pieces were worn throughout the video. So, let’s take a closer look at them. Rihanna wore Jacquie’s 3×3 Diamond Cluster Oval Raw Stud in her ear. She then wore a Diamond Bezel Bra Halter Bodychain as well as a Diamond Bezel Shaker Belly Chain. Huge thanks goes to Jacquie for giving me these pieces to show you all. I would also like to thank Alexa Lanza for providing me with the fashionable details on this video as a whole.