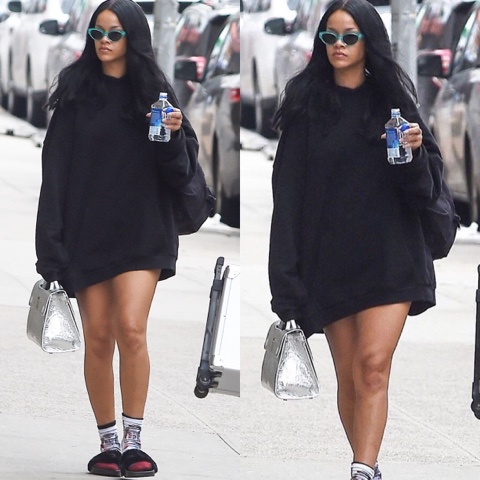 Comfort is key! Rihanna was spotted heading to her apartment in NYC yesterday. The tour is going so well for the songstress! So far, each date as been a sold out affair! Keep up with all of her tour outfits with us from our ANTI World Tour Fashion Recap. By doing so, you won’t miss a beat from her stage costumes down to her backstage ensembles! Let’s discuss what she wore yesterday: Rihanna’s look for her outing in New York was a pretty simplistic one at best. She started things off with an oval pair of sunglasses and her favorite oversized a $1216.00 Vetements Hoodie. This would be her third time wearing. The statement-making peace feature the definition of the word hoodie on the back on bold, white print. Rihanna also wore a pair of $145.00 Super Sunglasses. The model she is sporting is called the, Drew in the color turquoise. You can grab a pair from Native Ken or while supplies last at SuperRetroFuture’s online shop below. Rihanna’s next accessories included a pair of $15.99 Stance Socks from their NBA Legends Collection. The pair she has on feature an image of NBA player, Julius Erving. You can get a pair below. She then wore her upcoming FENTY x PUMA Leadcat Slides in Black. The shoes are slated for release on April 22nd. Her last accessory was a Crinkled LambskinMetallic Silver $3,400.00 Christian Dior Diorever Spring 2016 Tote.