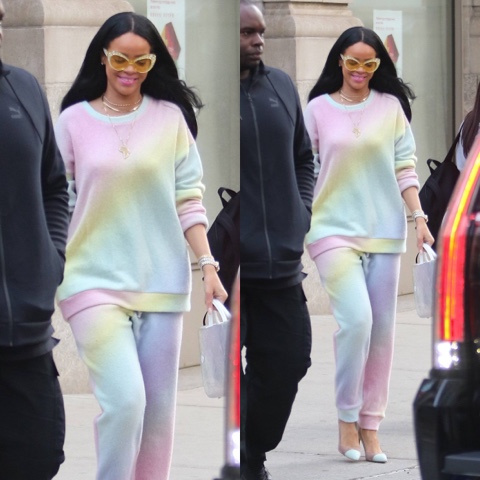 Rihanna is bringing her ANTI World Tour to Brooklyn tonight! She’s already back in New York after having been in Hartford, Connecticut last night. She was spotted out and about in New York today. Let’s take a look at what she wore. Rihanna wore pieces from a designer we haven’t seen her in until now! She looked super cute wearing her pastel colors! Rihanna is wearing The Elder Statesman $1345.00 Rainbow Degrade Sweatshirt with matching $1,962.48 Rainbow Track Pants. You can shop for both pieces below. Rihanna paired the look with her Moschino’s $425.00 Swarovski Crystal Yellow Cat-Eye Sunglasses. Unfortunately, these have sold out. Rihanna completed her look with $645.00 Manolo Blahnik Suede “Bipunta” Cap-Toe Pumps. Rihanna loves Manolo’s shoes and admitted in her most recent interview for British VOGUE that she has many pairs, joking that even asking the question was “disgusting”. Did you see her upcoming collection with Manolo? Check it out! Rihanna’s bracelets included Christian Dior Cannage Bangles (one in 18K Yellow Gold and one in 18K White Gold) — both of which retail at upwards of 11,097.00. Of course, her bag too is from Dior. She is still carrying her Crinkled Lambskin Metallic Silver $3,400.00 Christian Dior Diorever Spring 2016 Tote.