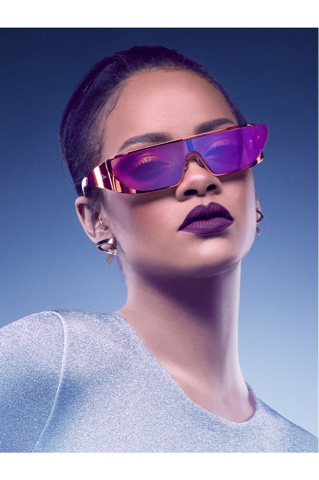 Rihanna’s Dior Collaboration Sunglasses will be available in JUNE:

As we’ve seen a number of times over the past month. We were able to confirm back back then that the sunglasses were from a collaborative effort between her and the luxury label, Christian Dior. Thanks to WWD, we have a few more details to inform you about regarding the designer frames. Rihanna has created a range of futuristic sunglasses in collaboration with Dior as part of her brand ambassadorship. The name of the collection is simply “Rihanna”. The sunglasses will be sold exclusively at Dior stores beginning in early June, though Rihanna has been teasing the shades on her Instagram account. There is one frame available in six variations — the silver, pink, blue, green and red styles will retail for $840.00 while a deluxe 24-karat gold-plated version will sell for $1,950.00. This is the second collaborative project between Rihanna and Dior. A year ago, Steven Klein photographed Rihanna in “Secret Garden IV,” a campaign and short film shot inside Versailles features her in Dior sunglasses, carrying the brand’s bags and wearing looks from the Esprit Dior collection shown in Tokyo in December 2014.

We are very pleased to partner for the second time with Rihanna. She is an artist, an entertainer, an entrepreneur, a philanthropist, and a style icon for today’s generation – Dior Chief Executive Officer Sidney Toledano The sunglasses are her first design project with Dior, a privilege never before granted to one of its house ambassadors, who include Charlize Theron, Marion Cotillard, Natalie Portman and Jennifer Lawrence. In October, Rihanna visited Dior’s headquarters on Avenue Montaigne to meet with the eyewear design team going over vintage frames, ultimately picking a style from 2000 as the key reference. In a statement provided by Dior, Rihanna named La Forge from “Star Trek” as her inspiration for the frames. I’ve always been obsessed with his eyewear, and when I got to Dior and saw all the materials I could play with, it all just came together. The process was pretty seamless. I spent a day at Dior with their eyewear design team. I started by looking through all the archives to see what they’ve done in the past, then got acquainted with all the new materials. I literally sat there and drew and drew until I was happy with the design, and the team illustrated it for me right then and there. We picked materials and colors that same day, and after that it was a matter of weeks before I saw the first prototype –Rihanna Dior’s eyewear designer Mathieu Jamin noted that this was the first time he and his team had worked with a celebrity in a design capacity, but he was impressed with Rihanna’s level of involvement.

She chose all the materials. We had a lot of different samples with different effect of metals. She chose all the lenses and took time to match all the colors together to see if it was right on her face. It was really important to her” –Mathieu Jamin Jamin said the resulting frames are “really strong and something we don’t have in the collection, so it’s unique.” There is no official campaign to accompany the launch, although Jean-Baptiste Mondino shot Rihanna modeling the frames for a series of in-house editorial images. Dior could not confirm if any further design projects with Rihanna are forthcoming.