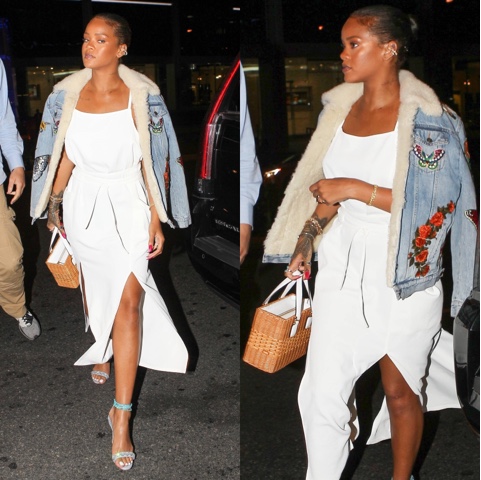 Rihanna is now back in Los Angeles as we await the second leg of the ANTI World Tour. The tour begins its European leg next week in Amsterdam! Last night, she was seen at Giorgio Baldi and later at Bootsy Bellows. Let’s take a look at her outfit. Yay! Rihanna is finally wearing a couple of the pieces that I covered at a glance in a few of my latest posts! She sported the $4,400.00 Gucci Embroidered Denim Jacket that one of her assistants held for her on May 31st in New York. She is also toting the sold out Mark Cross $1695.00 Manray Rattan Small Tote that I spotted in the Instagram photo posted of her in Turks and Caicos. The bag is accented with white trimmings and has a box-shaped body. Rihanna accessorized with her set of Jacquie Aiche rings and Gemstone Earcuffs that she’s been wearing pretty frequently over the past weeks. You can also see how awesome her Gucci jacket looks from the back! Rihanna’s white dress is from Adam Selman’s Spring 2016 Collection. She wore another from the same line up on May 31st. Rihanna completed this look with sandals from her collection with Manolo Blahnik and her set of Jacquie Aiche Anklets! Her sandals are called the “RIH VI’S” and retail at 895.00. It’s one of Rihanna’s favorite silhouettes, mirroring the signature “Chaos” cuff sandal we’ve seen her wear countless times in several colors.