Melissa Forde Teams Up with Wale’s Brand, Wrking Title to Create Her Own Line of Custom Bucket Hats 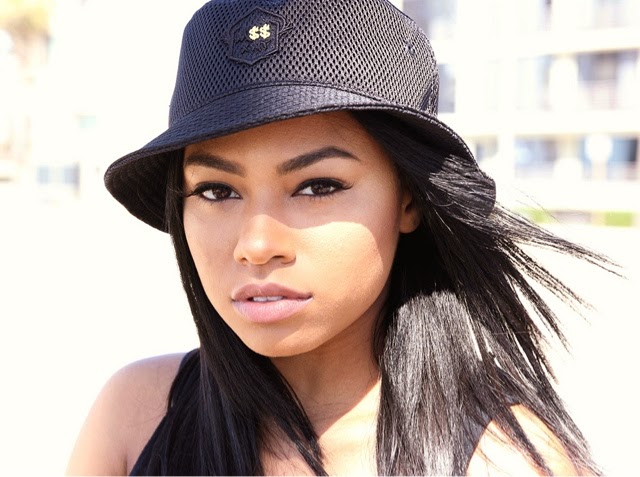 Melissa creates her own range of bucket hats exclusive to Opening Ceremony:

Rihanna’s best friend, Melissa Forde has captured the hearts of several Fenty fans the world over. Not only because of her slamming style, but her many talents that’ve been put on display throughout the years. If you’re not familiar already, Melissa has established herself as an outstanding photographer. Now, she’s added a new title to her growing list, fashion designer. Melissa’s signature accessory is the classic, bucket hat. In our coverage of her outfits we’ve seen her wear several from the likes of JoyRich, Halfman and Trapstar London — just to name a few. However, Mel felt as though the many of the bucket hats that’ve been created weren’t being manufactured in the proper fit, fabrics, or prints that suited her tastes. With that, Melissa took matters into her own hands and teamed up with rapper Wale’s hat line Wrkng Title to create a custom range of bucket hats that will be sold exclusively at Opening Ceremony. Melissa’s new hats come in three styles: the Black Beauty, featuring a sturdy black mesh perfect for warmer months, the Rastaprint, featuring an ikat graphic in shades of yellow, green, and magenta, and the Pink Pineapple, adorned with a fruit print atop a bubblegum background. Melissa herself photographed the images for her lookbook, making the project a very personal one that we are sure is very near and dear to her heart. The hats will release exclusively at Opening Ceremony on March 31st. We will be sure to updated this post with purchase links so that you can get your hands on them for your own hat collection! are NOW available and you can shop each style from the links we’ve provided below! Also, feast your eyes below to read up on even more details on this collection straight from Melissa’s mouth! Mel interviewed with The Fader about her debut as a designer:

How did you link up with Working Title?

Wale is a really good friend—I’ve known him for quite some time, he reached out and asked me to work with WRKNG Title on some skullies. [When he reached out], it was summer and I was mostly wearing bucket hats, so I suggested that we start doing those instead.

How did the bucket hat become your signature look?

I’m from Barbados, where we call them floppy hats—they’re just old fisherman’s hats that we’ve been wearing forever. I’ve always liked that hat so when it came back [in style], I was like, “Yes, finally!” I have a really tiny head and could never find the right fit—even if I had on a bunch of hair, it didn’t matter—so I wanted to make one that was more fitted for me to wear. It was my personal hat. Then, everybody started to like the prints, so we made them. Tell me about them the custom prints that you created for the collection.

First, there’s the “Rastaprint”. Wale is African and I’m Barbadian, so I wanted the print to reflect my style and my culture—also, it’s spring, so everyone wants to be colorful and pretty. Wale sent me some pictures of a few swatches of African prints, and that design was on the corner of one of the swatches. I really liked that print, so I just blew it on the hat.

The neoprene mesh is called the “Black Beauty.” I wear black all the time, so I really love that one. It’s totally different material for a hat—scuba diver’s material—and it’s really great for travel. When I fly, I don’t put this hat in a hat case, I just toss it in my bag. No matter how squashed it is, I can still throw it on, which is a huge thing for me because I’m always traveling.

Then there’s the “Pineapple” print. I’m a tomboy, I like to dress in boy clothes—but I decided to go really girly with the pink and the pineapples. It’s everyone’s favorite, including the guys.

Who’s the ideal guy that you’d see wearing this collection?

I definitely want to see A$AP Rocky and his crew wearing the collection—they’re a crew of fly guys. So many rappers wear buckets right now. I want to get everyone in them.

What do you look for in dudes in terms of swag?

I like a guy that has his own style. They don’t have to be dressed really baggy or tight, I just like to see guys who can execute it their own way.

You’re constantly switching up your hairstyles—from long to short, curly to straight. Do you keep the same rotation of hats with each new look?

I do change my hair often. Literally the minute I get tired of seeing myself looking the same, I’m ready to change. 3 weeks is the longest I’ll go, and then I’m ready to look completely different. Sometimes I’ll change between the bucket and the skully.

Where does your chameleonic sense of style come from? Have you always been playful with your look?

I change my hair because of my mom and my sister—they’re two women that inspired me. My mom would change her hair sometimes every day, and as I got older and more into my looks, I started to change my hair really often as well. My style right now is very tomboyish—I was super girly at first but we travel so often, so I’ve moved past the thought of even trying to be cute— it’s all about comfort now. Boys’ clothes are way more comfortable to me to be in when you have long days. You’re Rihanna’s right-hand girl. Were you nervous stepping into your own spotlight as WRKNG Title’s new creative director?

Kind of. But one of the reasons why Robyn [Rihanna’s first name] and I are still so close is that she is one of my biggest supporters. From the first time I even mentioned that Wale wanted me to do the hat line, she was pushing me to do it. She looked at every design with me—even when I did the lookbook shoot—and she recommended the female model that I ended up using. She’s so supportive. Even though it was nervewracking to step out and add something else to my plate, it’s been so much fun too. Everyone [at WRKNG Title] is so great, so when they asked me to stay on and be the creative director, it felt like I was just continuing my job under a different title.

What’s next for you?

We’re coming out with a coffee table book—Robyn’s other photographer, Dennis Leupold, and I have been putting pictures together. Dennis is an amazing photographer thats been traveling with us all the time, so I’m really excited. The pictures show a more personal side to Robyn—the side you don’t see on Instagram. I try not to get too personal on Instagram, because people feel as though they know you—but the book will be really raw, just photos of us chillin’.

Can you tell us a little about the next M$$ x WRKNG Title collection?

The next collection is amazing! We have perforated leather in a few pastel colors—mint green, lavender, and black and white. And I’m trying to do a little surprise—like maybe a limited edition bucket with a matching backpack.