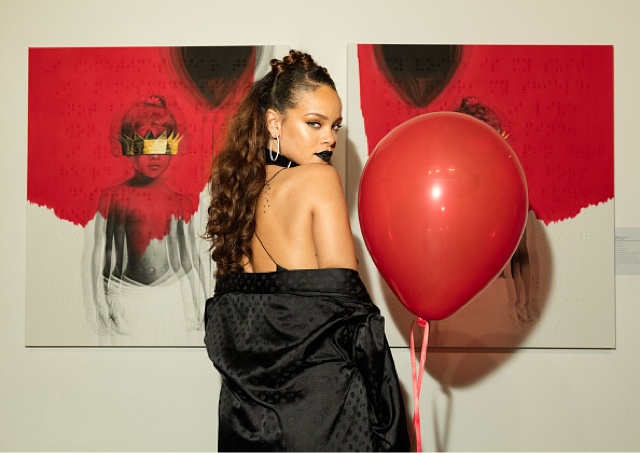 Rihanna wears Chrome Hearts to the unveiling of her 8th Album, ANTI’s Artwork :

So guys! Last night was absolutely huge! Rihanna had an event hosted at MAMA Gallery for the unveiling of her 8th Studio Album, ANTI artwork. Yes! Rihanna has again set the precedent as she embarks on what we hope to soon, finally be the release of her much anticipated album. Before we get into her outfit at the event in Los Angeles, let’s talk a little bit about the cover. The cover itself was revealed by Rihanna who worked with contemporary artist Roy Nachum. It depicts a young girl, –the singer’s pride and joy Majesty was also incorporated — with a gold crown covering her eyes, and a black balloon strung tightly to her wrist, painted in multiple, intersecting views. The back cover features an oil painting of the same young girl seen from behind. Both paintings are cleverly inscribed with sculpted Braille poetry by Chloe Mitchel that spreads between the front and the back cover of the album. The exhibition included seven original oil paintings that will be used for the album’s artwork. Now here’s the kicker for just why the cover is iconic in both design and delivery. The paintings that will be featured inside the album include poetry sculpted in Braille by Roy Nachum. This is the first time an album has ever incorporated physical Braille — another major move. The Braille inscription will also allow people who are blind to experience an entire album by touch. Whereas in the world of those who can see, we are often times the blindest. The depth of the concept for this album is staggering at best! Read the poetry here from our friends over at Rihanna-Fenty.com. In our excitement over this new cover reveal we didn’t forget about the fashion! Rihanna wore a long coat and a slip dress designed by Chrome Hearts. This ensemble was so fitting for the occasion because Richard Stark, the man behind the brand has been aptly described as the Antidesigner. He went from designing leather jackets and chaps for his friends to making outfits for the likes of Cher, Aerosmith and Motley Crue, among others, in leather and silver. He won the Council of Fashion Designers of America award in 1992 as Accessory Designer of the Year! A more then fitting resume for someone designing for CFDA’s 2014 Fashion Icon, Rihanna. The design of her frock is very intricate in that it features Chrome Hearts distinct cross pattern. She completed this look with Manolo Blahnik Chaos Sandals.