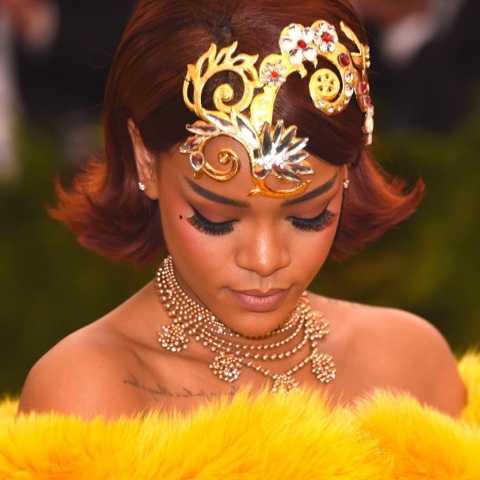 LVMH Signs Rihanna for her own Fenty Beauty Make Up Line:

EXCITING NEWS! According to WDD, The Kendo division of LVMH Moët Hennesy Louis Vuitton has landed a deal with Rihanna, for her own complete makeup collection! Rihanna has had her own capsule collections with MAC before. You may have called to mind her RiRi Hearts MAC Summer 2013 Collection and RiRi Hearts MAC Holiday 2013 Collection. You may also have though back to her Viva Glam and Viva Glam 2 released as well. Today, we bring you some info on what Rihanna’s cosmetics line will bring in the year 2017. It’s estimated that LVMH may have paid as high as $10 million to nab the superstar for the deal. Kendo, which functions as an incubator producing products that end up being retailed by LVMH’s Sephora perfumery chain and other outposts, will launch a Rihanna makeup range, called Fenty Beauty by Rihanna, in the fall of 2017. While the company provided no other details, David Suliteanu, chief executive officer of Kendo, was in a celebratory mood.

Fenty Beauty by Rihanna is a beauty rocket ship that will appeal to a huge and diverse global audience. We are aiming for the stars. –David Suliteanu The article went on to state just a few of the reasons we chant as a fan base on a daily basis as to why Rihanna is the perfect fit for the investment. As an entertainer, the 28-year-old singer is the youngest solo artist to have 14 number-one singles on the Billboard Hot 100 and she has spent 58 weeks on the top of the chart. So far, Rihanna has sold more than 54 million albums and 215 million singles worldwide. Her tally of awards includes eight Grammys, 12 Billboard Music Awards and nine American Music Awards. Her latest album, “Anti,” was released in January to strong sales. As far as image goes, Rihanna received a Fashion Icon Award from CFDA in 2014. “Kendo is honored to work with Rihanna,” Suliteanu concluded. As we mentioned in the outset briefly, she previously has collaborated in 2013 with MAC Cosmetics on a four-part, limited-edition RiRi Hearts MAC color cosmetics collection, and she also represented Viva Glam lipstick in 2014 to raise funds for AIDS research.
She has produced seven fragrances for Parlux Ltd. and the relationship continues. The latest one, RiRi, was launched in fall 2015. During a promotional appearance at Macy’s in Brooklyn, the star raised $46,000 in an afternoon. Although the celebrity fragrance category is decidedly on the wane, Rihanna’s star seems to burn brighter than ever. Industry sources estimate that Rihanna’s Parlux fragrances, as a group, generate about $75 million in wholesale net shipments. In addition to the U.S., her fragrance business is said to be particularly strong in the U.K. and Europe. “Our Rihanna business continues to flourish,” said Diana Espino, global vice president of marketing and brand development. Adding that Rihanna remains on top of the celebrity heap, Espino said the reason is because “what she produces has the authenticity of a fashion icon and an entertainment trendsetter. She is really a developer,” she noted, that in an era of social media transparency, “the consumer knows it.”
The Rihanna makeup brand will be the third major color cosmetics project that Kendo has undertaken, following those by Kat Von D Beauty and Marc Jacobs Beauty.

Kendo has given Rihanna the opportunity to play a key role in the development of her brand and the longevity of a long-term relationship. The company also offers a deep bench of development talent and a global reach in distribution. In markets where there are no Sephora stores, other, suitable retailers will be found.