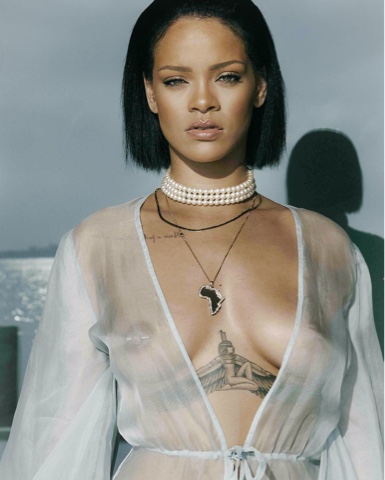 Here’s the rundown on everything Rihanna wore in the “Needed Me” Music Video:

Rihanna has released the music video for her track, Needed Me from her 8th studio album, ANTI shot by Harmony Korine. The video was shot almost simultaneously with her previous music video for the single, Kiss It Better. This video stands in stark contrast to her previous in that it’s a lot more action-packed! From motorcycles to gun play, Rihanna’s character shows no fear! Let’s discuss the fashion! As always I have to extend my gratitude to Alexa from Rihanna’s style team for being so forthcoming with the fashion details on Rihanna’s many looks! The first look of the video was a beautiful robe designed by Rosamosario. Rihanna previously wore the brand during the ANTIDiaRy filming in anticipation for her latest album. For this video, Rihanna wore the brand’s $2,060 Cosmic Love silk organza long couture robe. Her pearl necklace is vintage from C.Madeleine’s in Miami. In this next look from the second scene of the video, Rihanna wears a custom cat suit from Hood by Air. Her shoes are none other than Manolo Blahnik. Rihanna wore her favorite custom cameo rings from jeweler, Jacquie Aiche. Her jewelry also included two of her favorite Christian Dior Cannage Bracelets in White 18K Gold & Diamonds and Yellow 18K Gold & Diamonds. The bracelets retail at $11,500.00. Her necklace is also a custom piece. The Africa necklace was made especially for her from a jeweler, her stylist Jahleel Weaver revealed to me. Her bracelets during the motorcycle scene of the video are from Chopard. She’s grown quite found of the jewelry and has worn it with several of her day to day looks. Here you will also see a few exclusive images of Rihanna’s cameo rings from Jacquie Aiche. Her team was so kind to provide me with these so we definitely send a huge round of thanks to Jacquie!