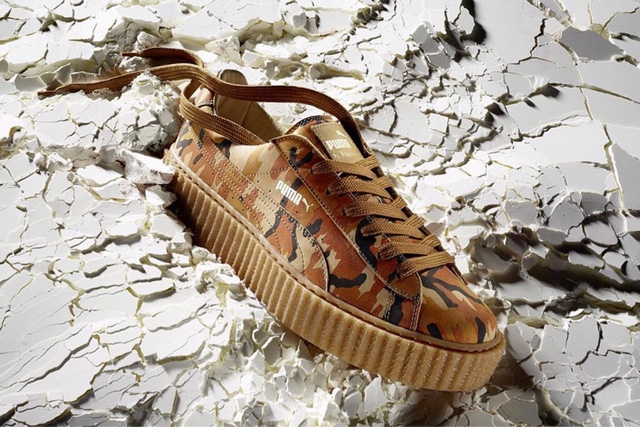 Today Rihanna is releasing yet another edition to the family of PUMA Creepers. The footwear had taken style back to the 80’s with its classic stacked heel design. The shoes have certainly caught the eye of not only her fans but her peers alike. We’ve seen so many celebrities rocking the Creeper and wearing it WELL might we add! The list ranges from Gigi Hadid, Bella Hadid, Kehlani, Jessica Alba, Hailey Baldwin, Travis Scott, The Weeknd, Chad Johnson, Zendaya — to SO MANY MORE! The newest release from Rihanna is called the “Nu’Camo”. The footwear has a tonal creeper sole to match the wild camouflage print of the upper. Although the Nu’Camo Creeper releases globally today the shoe became available on the 25th at Colette due to an amazing pop-up shop in Paris selling several FENTY items. The items included her past Creeper releases, the LEADCAT Slides, the Rihanna x Dior Shield Sunglasses and select Merch from the ANTI World Tour. Is this pair for you? Are you ready to shop?! Here’s a list of retailers carrying the shoe.